You’ll need a paddock with fencing that is suitable for sheep, and a small pen for handling and alpaca maintenance. Roofed shelter is preferable but not essential, as long as the alpacas have a reasonably sheltered area they can hunker down in.

Like sheep, alpacas eat grass, but we also supplementary feed ours. The quantity varies depending on time of year and the amount of grass available, but this gives us the opportunity to make sure they get the nutrients they need that are not always present in the land, and it keeps them ultra-friendly. 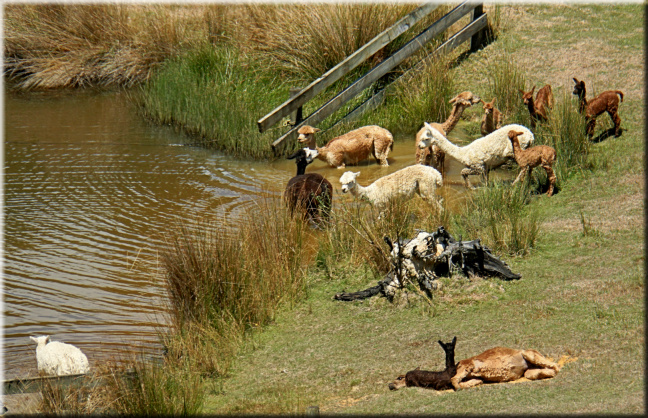 We have a number of pet boys, of various ages, available. Most have paddock buddies, so we will try and keep them together if possible. Prices range from $300 to $850 each, depending on the age and quality of the boy. Some are halter trained. If a boy is sold as a pet, but is later certified as a stud, an additional fee will be due; this is because certified studs are worth much more…

These four boys are all from the same stud and have been together for most of their lives. All four have been wethered.

Both these older boys are halter trained. Solstice is a darling, whilst Aragorn can be a bit of a handful!

There’s a champion in this bunch! Magnum is the reigning champion of the Morrinsville Show Alpaca Agility Trophy! However, if you want a potential stud*, then Alexei is the chap to look at. We’re selling him as a pet, but we were sorely tempted to certify him as a stud. He’s compact, and has a fine, dense fleece, just like his pa (see our studs). Magnum and Alexei are halter trained. Karl is just a sweetie….

* if Alexei is certified as a stud in any registry at a later date then an additional $1,000 fee will be invoiced at that time

We’ll be very happy to hang onto this lot. They’re all ‘home grown’, and all are showing a step improvement in quality on their dams.

Some of the first females born into the Chipperfield farm. These young girls are just right to start improving your herd.

We currently have one working stud at our farm, and two others available at other North Island farms.

Ricci is a compact male with a fine, dense fleece. He has produced seven beautiful cria for us. Alexei and Hihi, in particular, are chips off the old block.

Surico Hussar   Not available for outside matings

Hussar is not available for outside matings; however, if you are purchasing a female from us then talk to us about a pre-sale mating.

Shadow Wood Nitro  Not available for outside matings (yet)

Nitro is the new boy on the block. He still needs to earn his stripes, so is not yet available for outside matings. But with a pedigree as good as his - Watch This Space…..

We have a number of older girls who we are no longer breeding from. These are ideal as pets, or as a ‘starter herd’ for a new breeder.

These six girls are mothers and daughters and were our original starter herd. They’ve been together all their lives, so we will not split them. Five of them can still be used for breeding and have produced us a number of excellent cria.

We shear our alpacas once a year. There are a number of alpaca shearers around. Shearing is a good time to get other alpaca maintenance done too, like toenail trimming, injections etc.

If you’re starting out, there are a number of questions to ask yourself.

1. How much land do I have? (you can keep approximately 5 alpacas on half a hectare – but it does depend on the quality of your land)

2. Is it suitably fenced, and is there a pen? (fencing and a pen that is suitable for sheep is fine – but no electric fences)

3. Am I around enough? (we check on our alpacas once a day, and supplementary feed at least every other day. It is not enough to be there at the   weekends, unless you can get a friendly neighbour to help out)

4. What do I want from my alpacas? Are they pets, or am I looking at a longer-term breeding plan? Do I want to take them to shows? (it’s a      good social life!) Can I use their fleece? Or what else? (talk to us about your requirements)

If you’re after pets, then a small number of non-breeding alpacas are the way to go. Alpacas must be kept with others, so you’ll need at least two, but preferably three or more. Boys that are not being used for stud purposes are ideal (and usually reasonably priced). They can be wethered, if required, at about 18 months old (although this isn’t always necessary). Or a small herd of non-breeding girls can work well too.

If you have enough space to expand your herd then you might be interested in some breeding girls. These are more expensive, but there is nothing quite like seeing cria from your own herd. Price can vary, depending on the quality of the female, and whether she is bought already pregnant or empty.

One way to start your herd economically is to purchase average females then put them to a good quality stud; the cria produced will be a step change better than their dams (this is how we started).

And talking about studs – unless you are an experienced alpaca owner with a reasonably large herd, I would not buy and keep one. It is unfair on the whole herd to keep an entire male in the same herd as the females long term. Instead, talk to an established alpaca stud about using one of their stud boys. Or purchase a part share in one that is based at another farm. Prices for stud fees and part ownership will vary, depending on the quality of the stud.

We welcome visitors, just give us a ring