Unlike llamas, the fibre of the alpaca is used for fine clothing, known as the royal fleece, and used in the past only for the clothing of royalty. Alpaca fibre is softer than cashmere or angora, and warmer and lighter than wool, without the itch or prick. And because alpaca fleece has no lanolin, it is hypo- allergenic. It also comes in 22 natural colours, is fire resistant, is considered one of the strongest natural textiles and does not fade. Fibre or fleece is the correct term for alpaca wool, which is shorn once a year, usually in the spring. Lifespan: 15-20 years. Some have been known to live to 25 years old. Female alpacas will spend most of their lives pregnant. Reproduction will begin as early as 1.5 years and can go up to 19 years old.

The baby is called a Cria. The female is called a Hembra, in NZ a Dam : In Spanish the male alpaca is called a Macho, and in NZ a Sire.

The gestation period for a dam is 11.5 months, and twins are very rare. A cria will usually weigh around 8 kg. at birth and will be up walking and nursing only hours after it is born. They are normally very healthy animals with few difficulties during birthing. Delivery is usually in the daytime and between the hours of 9 - 3.

Alpaca fibre is a premium fibre and in high demand in the fashion industry.

Size and quality of fibre are some of the major differences between llamas and alpacas. They make fine clothing out of alpaca, while the fibre of a llama is coarse, as well, llamas are pack animals and used for trekking or as guard animals.

Alpacas hum to their babies and to each other as a way of communicating. Males will make a strong humming trumpet, which is a love song to the female when he is trying to breed her. Females are induced ovulators and it is the male's song that induces her to ovulate.

Alpacas do not spit like llamas, who are territorial. Alpacas spit as a form of communication with other alpacas. Males will spit in order to dominate another male however. Females will spit off a male if she is already bred, and at a human if it is threatened or feels harm will be done to their baby.

The alpaca has a two-toed foot, not a hoof, with a pad on the bottom. They leave the terrain undamaged. They also have only one row of teeth, and a hard upper plate that allows them to bite the grass and not pull it out when they eat. This keeps your pastures protected; creating the term, a very “green” animal on the face of the planet. Alpacas are considered the Green Livestock.

Getting Started: The Basics

A commitment to care for animals 365 days a year, good weather and bad (unless you plan to board them with another breeder). A budget for expenses of management (and marketing if applicable)

A fenced pasture area for your alpacas, a smaller enclosure for catching/ feeding/ handling alpacas and/or some type of shelter appropriate for your weather (barn, shed, etc.)

* Rake, shovel and wheelbarrow/cart for cleaning up poo or a paddock vac.

* A mineral/salt, feed supplement suitable for your type of pasture/hay and area soil

* Wormers such as Dexomat or genesis Ultra etc. (consult a local vet to determine the requirements for your region)

* Vet who knows something about camelids or is willing to learn

* A Mentor, hopefully the breeder from whom you are buying your alpacas

* A list of phone numbers for suppliers, including a professional shearer in your area

* If you know how to give injections or are willing to learn, your vet can give you a list of supplies needed: syringes, needles, injectable wormer, vaccines, Epinephrine for dire emergencies, etc. 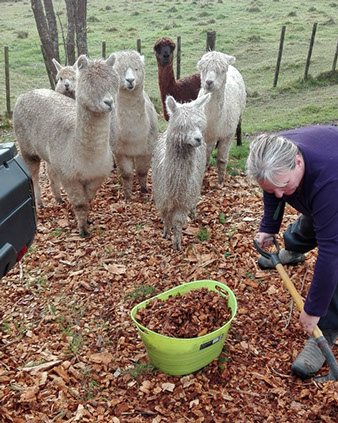 Countries of Origin:Peru, Chile, and Bolivia.

Population: There are thought to be just about three million alpacas worldwide with 94% of them living in South America. This worldwide population is made up of 93% huacaya and 7% suri alpacas.

Types: There are two different breeds of alpacas. The Huacaya (pronounced wa-ky-ya) and Suri.These two types have similarity in their body structure but differ in their fibre. Huacaya fibre is a fuller fleece with crimp and staple, whereas Suri fibre grows in locks that have more luster and length.

We welcome visitors, just give us a ring